How to Get Started with Voice Search - yext.co.uk
Industry insights

How to Get Started with Voice Search

Whether you call it “voice” or “speech,” we live at the beginning of a fundamental change in how people complete tasks. Voice search is now an area you need to focus on. Google and Amazon combined represent the lion’s share of the market for voice-enabled digital assistants:

Amazon alone has sold tens of millions of devices, so statistics like those below — showing almost 40% of the U.S. owns a voice-enabled digital assistant — are believable.

Voice assistants are here to stay, and will continue to impact businesses and consumer behavior. 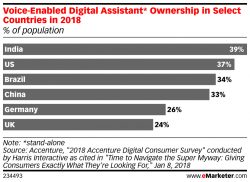 Voice assistants are becoming our digital butlers, taking care of the simple things, freeing our focus and time for other tasks.

In everyday life, you probably don’t see the changes as a big deal. Maybe you ask Alexa for a weather update. It’s simple, accurate, and fast. She states the facts, gives you the upcoming forecast, and you don’t think about it again.

If we rewind the clock five years, getting that weather information was a different process. Back then, it meant grabbing your phone, unlocking it, opening an app directly, or searching for the weather update using a search engine. And in the end, you had to read the information.

Regardless of the reasons why we as consumers like today’s voice-activated interfaces, the fact is that our use of voice assistants is changing our behavior. According to eMarketer, we’re using radios, phones, and computers less. We’re watching TV less and reading less. Our voice assistants are filling in the nooks and crannies of our lives. We’re not going to “listen to a movie” on a smart speaker. But we will get weather updates, listen to music, add things to our calendars, turn on our connected lights, and so on.

What kind of impact will voice search have on businesses?

We’re at the start of a new generation of consumer adoption around a technology. We can all remember a time when people said the computer wouldn’t catch on, that the internet wouldn’t be a big deal, or that mobile devices wouldn’t change consumer behavior. Each time, those who saw the technology, learned about it, and prepared for it came out a step ahead. Those who felt there was no reason to invest “right now” were left scrambling to catch up.

Voice represents another fundamental technology shift, and consumers are buying these products at a rapid pace. So if you’re thinking there will be time later to get in the game, or that this will die down and won’t be a big deal — think again.

Some of the largest tech companies in the world are carving up the market to each own a share, and they’re doing it because they believe there is a future in the technology. They’ve done the research and have chosen to build entire business models, brands, and divisions around serving that new space.

If we look at Amazon, we see them seeking to rapidly expand Alexa’s footprint. The reason is simple. If Alexa becomes ubiquitous, Amazon wins more market share, and market share is money. The data that services like Alexa generate is also money. Soon, Alexa will be coming to wearable devices like smart watches, fitness trackers, and headphones. Alexa is coming to Windows-powered computers. Amazon even has a $100 million developer fund set up to help developers and companies build for Alexa. And this is just one company in this growing field.

Hopefully you’re beginning to see the importance of voice and the impact it’s already starting to have. In our next blog post, we’ll dive deeper into the actions you can take to position your business for success in the voice-enabled future.

Want to learn more? Download our ebook How Voice Search Changes Everything.

Want to learn more? Download our ebook How Voice Search Changes Everything.