Google removes ads from the right rail: why the local pack is more important than ever - yext.co.uk
Industry insights

Google removes ads from the right rail: why the local pack is more important than ever 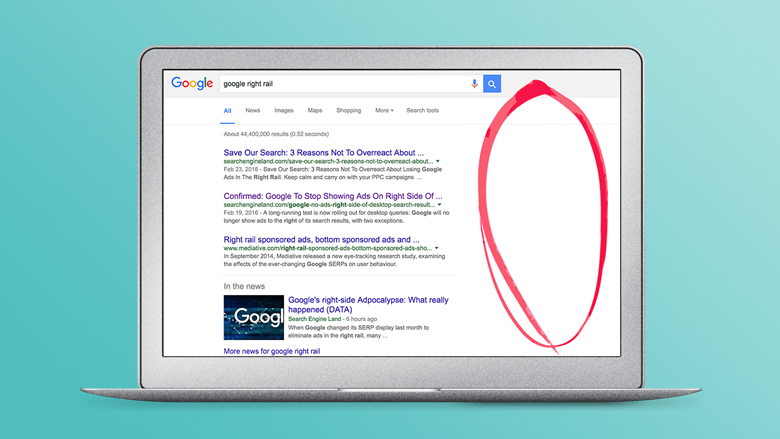 By now you will have noticed that Google has removed ads from its “right rail” on desktop search. Months into the rollout, this change to Google’s Search Engine Results Page (SERP) has significant implications in that, now more than ever, ranking in the local pack is critical for businesses.

Google confirmed that they are trying to provide a more consistent desktop search experience to mobile/tablet in order to maximise the effectiveness of its desktop ads.

"Ultimately, we are making this update to improve the user experience on Google Search and to make that experience consistent across desktop, tablet and mobile," Matt Lawson, Director of Performance Ads Marketing at Google, said in a recent column.

But as Google Ads move in-line with organic search results, the importance of appearing in local pack results becomes critically important for businesses. Here’s why:

in 2014, Mediative conducted an eye-tracking research studying where users look on Google’s SERP.

Not surprisingly, the study showed that users tend to focus their attention in three areas:

In terms of where users click on Google’s SERP, several studies have concluded that organic search listings receive more than 90% of the clicks with users favouring local search results the most.

The key takeaway is that Google’s new Desktop SERP layout – on most screen resolutions –  pushes organic search results well BELOW the the visible page fold, leaving only the Ad blocks and local pack visible to the user.

As a baseline, if we use a desktop monitor (with a resolution 1920 x 1200), here’s approximately what users will now see in the new SERP layout.

The problem with organic results positioning is further exacerbated on retina laptop displays:

Conclusion: in order to maintain relevancy in local search, businesses need to focus on appearing in local pack results.